Vegemite vs Marmite: How off-field antics dominated the headlines

by Andrea Philips in News

With The Ashes evenly poised ahead of the Third Test which kicks off in the UK later this week,  outside of discussion about Steve Smith’s batting heroics and an impressive debut from Jofra Archer, conversation moved towards something a little unexpected: a ‘war of words’ – or a ‘sledge battle’ if we want to stick in the cricket theme – between two iconic, well-loved brands from Australia and England: Vegemite and Marmite.

With the much-anticipated duel between the two sparring countries kicking off, enter Vegemite who took the bull by the horns to ignite a frankly imperious dialogue as the brands took centre stage to add some more fuel to the rivalry.

Following Marmite’s sampling activation in its attempt to win fans over and drive trial – including among a crowd of expats, Vegemite launched into action with a carefully crafted response.

What has ensued has become a genuinely bold and disruptive marketing campaign (a phrase which can be found on many client briefs) which has been a win for both brands, playing on fan and brand loyalty with each brand taking up the mantle to represent their country in their ‘time of need’.

The strategy was simple: ignite talkability at the heart of a key cultural moment and champion Vegemite’s iconic status. The execution – even simpler: run a full-page print ad (print still being a medium in relatively good health in the UK) in a well-read media title where it would immediately provoke a reaction and encourage shareability. And it did just that. Social media was soon full of photos of the ad – time difference also helped in propelling the news item to the top of the morning news agenda while also capturing attention throughout the day in the UK. A carefully co-ordinated international PR approach. 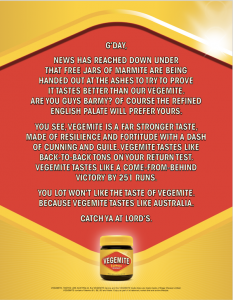 Vegemite is a brand which exudes personality and does not shy away from its brand values. Copy was direct, witty and brought both the personality and brand attributes to life to put smiles on faces of fans, wherever their loyalty laid, through its confident approach. Consumers love to be entertained – it creates a good ‘did you see that?’ talking point and it leaves a lasting impression that makes them want more.

With all of the above in mind, Marmite were not going to take this lying down – and were wise to the PR opportunity that they would be mad not to take up. Their response – equally as witty with a cheeky response (the kids these days might call it a ‘burn’) played on the notoriety of certain Aussie cricketers and association with tampering – in this instance, connecting ball tampering with ingredient tampering. Brand values were again at the heart of the Marmite narrative to give fans something to barrack behind. A simple execution with maximum impact based on the timeliness of the response.

But Vegemite were not done – they were not prepared to end the ‘mitey’ battle there. Their response played on an existing behaviour where members of the members club at Lord’s Cricket Ground, where the last Test was played, would dress in red and yellow – the very same colours of Vegemite. This played directly into the hands of the Aussie brand who took the battle to the next level, building Vegemite’s synonymity with Australia and cementing its charge to represent Australia. 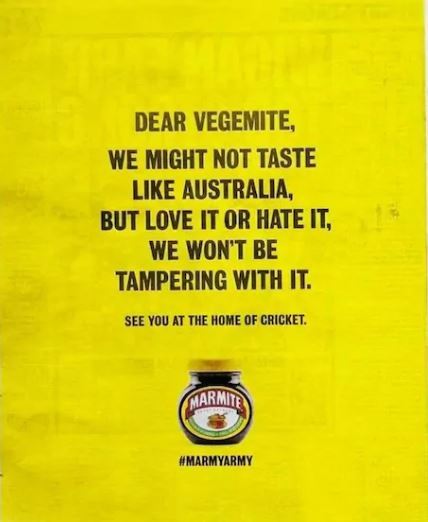 It’s been refreshing to see the marketers be prepared to put their brands on a pedestal and actively engage each other. Very rare is it that two brands are engaged in such a public discourse which has such an irreverent tone and parades creative flair vs brands playing ‘safe’, being conservative and acting reactively.

Forget news-jacking – it appears we now have a new phenomenon on our hands: brand-jacking. Brands capitalising on each other’s popularity to build on public interest and actively engage in conversation to complement what their brand stands for. This could be mutually beneficial – or it could be one-sided. But brands are often just as popular, if not more popular than celebrities, given their ability to be integrated into households day in, day out. So there is full permission there – but it’s not been a natural environment for many to play in. Will this campaign change that? Time will tell. But it’s clearly an exercise that has paid off for both brands with highly positive media coverage and social sentiment shown towards both in the past week since the first ad was published.

Consumers appreciate refreshing honesty, self-depreciation and a good sense of humour – rather like a prospective partner. This is what Vegemite and Marmite have delivered in spades – and it’s likely this will continue – we still have three more Tests to go. This battle still has life in it yet. Stay tuned…The result of the next Test might dictate who comes out first….